More information about A Pyrrhic Existence

Dark experimental doom band ESOTERIC are announcing a new European Tour dates, supporting their fellow titans of Doom; SATURNUS. ESOTERIC will be touring for the first time since the 2019 release of “A Pyrrhic Existence”.

The tour will be kicking off in the Danish capital Copenhagen with another 17 shows ahead in 11 different countries. After kicking up dust throughout Europe, the band will have their last show in Toulouse (FR) on November 19, 2022.
The band announce they will add a large amount of songs of the album to their setlist during the ‘Before The Storm’ tour.

A full list of confirmed dates can be found below.

The album is available in the Season of Mist shop HERE.

ESOTERIC comment:“ We are really looking forward to obliterating stages across Europe with our friends Saturnus, promoting their long awaited, highly anticipated new album. We have been waiting a long time to tour following the release of A Pyrrhic Existence 2CD/3LP in November 2019, following the chaos and shutdown of gigs caused by the pandemic.” 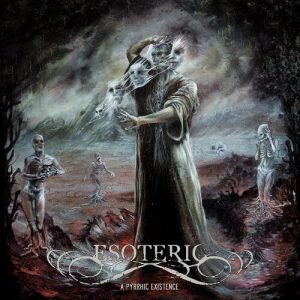 Dark experimental doom band ESOTERIC are now streaming their new album ‘A Pyrrhic Existence’. The record was released on Friday, November 8. Listen to the full album at the link below.

Dark experimental doom band ESOTERIC are now releasing a track teaser for the song “Culmination”. Listen to the song below.

Dark experimental doom band ESOTERIC have teamed up with Invisible Oranges to release a track teaser for “Rotting in Dereliction”. The teaser is an edited version of the full song which can be found on the upcoming album ‘A Pyrrhic Existence’. The release date of the record is slated for November 8, via Season of Mist.

UK doom band ESOTERIC have released a 10-minute long track teaser for the song “Descent”. The teaser is an edited version of the nearly 30-minute song on the new album, ‘A Pyrrhic Existence’. The release date of the record is slated for November 8, via Season of Mist and pre-orders are now available.

UK Doomsters ESOTERIC have unveiled the cover artwork and track list of their new album ‘A Pyrrhic Existence’. The record is set for worldwide release on November 8, via Season of Mist. The long-awaited follow up to 2011’s ‘Paragon of Dissonance’ was recorded earlier this year at vocalist/guitarist Greg Chandler’s Priory Recording Studios in Birmingham.